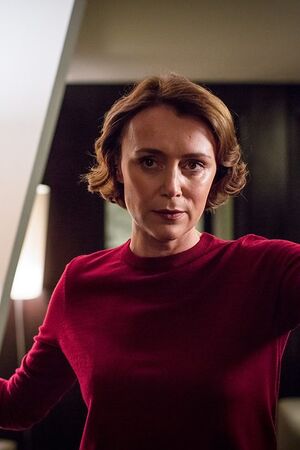 The Right Honourable Julia Elizabeth Montague is a Conservative Member of Parliament and the Home Secretary. Julia is the MP for the constituency of Thames West, and lives alone following her divorce from Roger Penhaligon.

Julia Montague was born on 12 June 1977 in Cheltenham, Gloucestershire to Frances and Richard Montague. She has no siblings and no children. Before she went into politics, she studied law at University College London and worked as a criminal barrister for a several years afterwards. Eventually she went into politics to help people and had a quick rise to fame.

As Home Secretary, Julia Montague is spearheading a controversial new counter-terrorism bill that would enable the security services almost unlimited surveillance powers. It is believed that Julia's proposal is but one step on her path to challenging the Prime Minister for leadership of the Conversative Party,

Julia's rise to prominence is not without danger. The counter-terrorist bill leads to her becoming a target for terrorists. Her new Principal Protection Officer, David Budd, must now be on guard to save her life.

Julia is smart, ambitious, and undaunted in the face of any opposition to her. She went into politics to help people. She is unafraid to push a controversal new counter-terrorism bill through the Parliament (the RIPA '18 legislation), which would give the security services unprecedented powers of surveillance.

She appears cool and calculated on the outside, but by the time she survives the first terrorist attack on her life and when she is alone with her PPO David Budd, we see there also is warmth, vulnerability and an openness to her character.

She used to be married to Chief Whip Roger Penhaligon (m. 2007; div.: 2012), but had nothing but "utter contempt" for him by the end of their marriage. Even by the time we see them together, they share an obvious animosity

Her Special Advisor Rob MacDonald harbours a romantic crush on Julia, but she never reciprocates the feelings. On the contrary, she feels awkward about his advances and rejects them repeatedly.

From the moment she has her first proper conversation with her new PPO David Budd, she feels an attraction to him that goes beyond any professional relationship. She takes a liking to him and also helps him out with his son's schooling. After the first attack on her life, they enter an initially sexual relationship, Mere physical attraction quickly changes into more. She falls in love with him. By the end of episode three, she is ready to enter a relationship with him and jeopardize her career for him. She wants him right beside her" because it's their choice."

This character appears in the first three episodes.

"I am not the queen, you're allowed to touch me."

"I need you to fuck off, no offence."

"We are not required to apologise for the past. "

"If I don't come back, go to the Death Star"

"Whatever your training has made you, it's out of control"

"Sex with the Home Secretary is heinous crime."

“I know you’ll never let anything bad happen to me.”

Despite several attempts to explain why show creator Jed Mercurio decided to let Julia Montague die, there still remain rumours that Julia is in fact still aive. There are still hopes she might reappear in season 2. [1] [2] [3] [4]